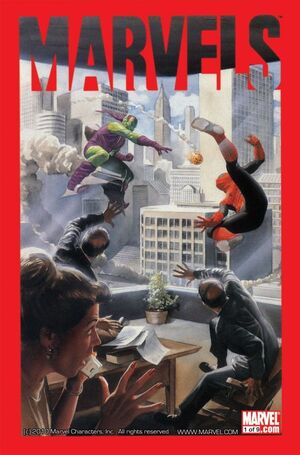 It is with considerable difficulty that I remember the original era of my being...

Appearing in "The Origin of the Human Torch"Edit

Synopsis for "The Origin of the Human Torch"Edit

The Human Torch was created by the great scientist Phineas T. Horton, but Horton only intended to create a normal android, the flaming skin was an accident. After an exhibition, the public becomes fearful of the flaming man as a possible menace. Because of this, and the fact that the android can not control his flames, he has to be encased in a metal coffin and dropped into concrete where oxygen for fire can not reach him.

Under the concrete, Horton has found a way to teach the Human Torch about the world. During his confinement the android learns the importance of "life" and "freedom". Eventually, in 1939, a crack in the concrete allows oxygen to reach the Torch's body, causing him to ignite. He blasts his way out of the prison, eventually learning to control his powers.

Retrieved from "https://heykidscomics.fandom.com/wiki/Marvels_Vol_1_0?oldid=1446090"
Community content is available under CC-BY-SA unless otherwise noted.