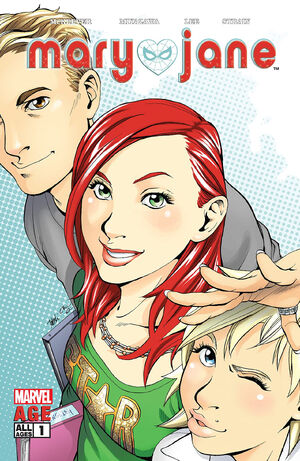 I want Spider-Man to be my Homecoming date.

Appearing in "The Real Thing"Edit

Whether she's going to school or hanging out with her friends at the Coffee Bean, Mary Jane Watson is always the life of the party.

But what no one knows is that this gorgeous redhead's exuberant personality is a shell designed to make her forget about life's harsh realities.

From her social life to her undying interest in becoming an actress to her crush on that costumed crime-fighter who swings along the New York City rooftops, it's clear that Mary Jane just wants to escape.

Retrieved from "https://heykidscomics.fandom.com/wiki/Mary_Jane_Vol_1_1?oldid=1614689"
Community content is available under CC-BY-SA unless otherwise noted.