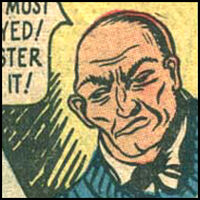 The Master was a terrorist who used his "Death Ray Machine" to kill crowds of people instantly. He noticed that every time the Comet pulled one of his stunts, newspaper reporter Thelma Gordon had the exclusive story. He kidnapped Thelma, and continued using his Death Ray Machine, threatening that if the Comet interfered, he would kill her on the spot.

The Comet did rescue her (she was his girlfriend), and then killed the Master with his De-Atomizing rays.