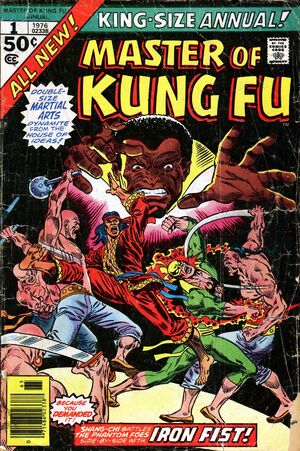 Daniel Rand seeks Shang-Chi's help in locating the missing Colleen Wing only to be approached by Quan-St'ar, a resident of S'ahra Sharn, the mirror image of Danny's homeland. Quan-St'ar lies to Danny and Shang-Chi about an army gathering to attack Danny's homeland. The two Kung Fu masters believe him and are arrested and imprisoned in S'ahra Sharn for five days. It turns out that Quan-St'ar is the one gathering the forces for the impending attack and he wants to be sure Iron Fist does not interfere. With the help of another S'ahra Sharn resident who does not see eye to eye with Quan-St'ar, Shang-Chi and Iron Fist escape their dungeon cell and take the fight to their foe. In order to nullify Quan-St'ar's sorcery they must battle their way to the Globe of Eternity and destroy it. After they succeed in defeating Quan-St'ar the grateful citizens return the fighters to Earth. They part as friends, Danny telling Shang-Chi that he has resolved to locate Colleen on his own.

Retrieved from "https://heykidscomics.fandom.com/wiki/Master_of_Kung_Fu_Annual_Vol_1_1?oldid=1446111"
Community content is available under CC-BY-SA unless otherwise noted.