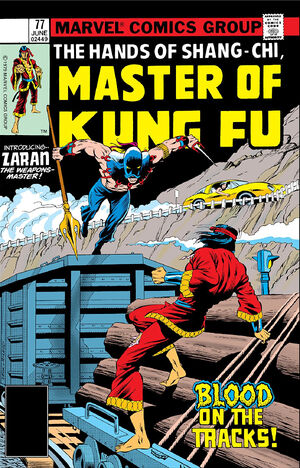 Come now, Shang. By now you should be wise to the rules of our 'Games of Deceit and Death'.

Shang-Chi and Leiko Wu discuss an incriminating audio tape, which proves that MI-6 ordered their execution. They intend on delivering the tape to the Ministry of Defense in the hopes of exposing the corruption inherent in MI-6. Leiko secures the tape in her boot pocket and prepares to meet Sir Denis in Scotland.

Meanwhile, Shang and Leiko are driving through the Scottish hills when their vehicle is overtaken by a large truck at an overpass. A mercenary named Zaran the Weapons Master exits the vehicle demanding the tape. Leiko throws the tape to Shang, and then attacks Zaran's men. Zaran intercepts the tape by hurling one of his sais, and the tape flies over the bridge onto a train. Shang-Chi and Zaran both leap on top of the train where they begin fighting one another. Leiko attempts to follow the train's path in her car. Zaran throws a blade at the car, puncturing the tire. Leiko's car tumbles off the road, and Shang-Chi rushes to her aid. Zaran collects the tape and makes his escape.

Meanwhile back at Stormhaven Castle, Ward Sarsfield enters the room shortly after Black Jack disposes of the robots. He pulls a gun on Black Jack and announces that he intends on killing anyone associated with him including Shang-Chi.

Retrieved from "https://heykidscomics.fandom.com/wiki/Master_of_Kung_Fu_Vol_1_77?oldid=1446172"
Community content is available under CC-BY-SA unless otherwise noted.