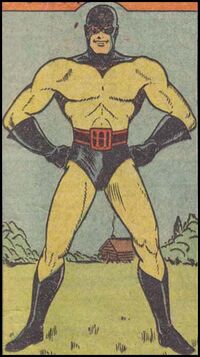 Your goose is cooked punk!

When patrolman Matthew "Kip" Burland noticed someone in a masquerade costume robbing a mansion, the robber knocked him out and placed some diamonds in his hand. Later, the police found Kip passed out with the jewels and believed he was the looter. He was relieved of his badge and asked to stand trial for grand larceny. While out on bail, he scoured the streets looking for the man who framed him.

One evening, he noticed a late night delivery truck at a fur warehouse. Suspicious, he entered the warehouse to find the Skull – the same masquerading "corpse" who framed him. He was knocked out again, but this time he was taken to the deep woods and left for dead. Soon after, a hermit stumbled upon him and nursed him back to health. As the days continued, he confessed to the hermit about the frame up. The hermit, being a sheriff at one time, had also heard of the Skull. To end the Skull's crime spree, the hermit began training Kip by rebuilding his strength and teaching him ways to fight crime. Many months later the Black Hood was born.[1]

Meanwhile, the Skull decided to crash the costume party of society girl, Miss Barbara Sutton. The Black Hood heard about this and followed suit. At the party, the Skull shot his victims with poisoned darts and stole their jewels. Quickly, the Black Hood deduced that Mrs. Sutton, Barbara's mother, was not the true hostess at all, but the Skull in disguise. With a brief struggle, the Skull was captured and Kip vowed to continue fighting for justice as a costumed hero. Later, he would romance Barbara Sutton, and she would become his confidant.

When his name was cleared, he went back to being a police officer working under Sergeant McGinty. Though Sergeant McGinty was very good friends with Kip, he did not know that he was also the Black Hood. In fact, McGinty believed the costume "vigilante" was up to no good and was actually a foe. On several occasions McGinty tried unsuccessfully to capture him.[2]

In order to expose Black Hood's identity, gang leader Needlenoodle arranged for the kidnapping of Sergeant McGinty. Kip actually witnessed the crime and followed the gang's car to their hideout. Unfortunately, this was an elaborate ruse and Kip was lured to a trap. When he arrived at the hideout, he was told at gun point to enter.

Inside, he noticed his boss was passed out and tied to a chair. Unfortunately, to save him, Needlenoodle threaten Kip that he better reveal his "true" identity, or else McGinty was going to be shot at point blank. Reluctantly, Kip removed his police uniform, revealing his costume. Moving quickly, he took out the gang, but Needlenoodle escaped.

Later, the newspapers published the Black Hoods identity and McGinty accepted the idea who his friend really was, letting bygones be bygones.

Now forced into retirement, Kip quite the police force, and also being a costumed hero. He opened his own private detective agency and hired his confidant Barbara Sutton as his secretary. Together they went after Needlenoodle who was killed during a chase through the railroad yards.[3]

Several years later, Kip's nephew, Tom Burland, would continue the crime fighting tradition by being the next Black Hood.

Retrieved from "https://heykidscomics.fandom.com/wiki/Matthew_Burland_(Earth-MLJ)?oldid=1559249"
Community content is available under CC-BY-SA unless otherwise noted.