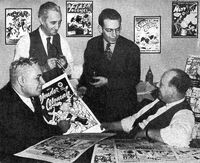 In 1933, Gaines devised the first four-color, saddle-stitched newsprint pamphlet, a precursor to the color-comics format that became the standard for the American comic book industry. He was co-publisher of All-American Publications, a seminal comic-book company that introduced such enduring Fictional characters as Green Lantern, Wonder Woman and Hawkman. He went on to found Educational Comics, producing the series Picture Stories from the Bible. He authored one of the earliest essays on comic books, a 1942 pamphlet titled Narrative Illustration, The Story of the Comics.

After Max Gaines' death, Educational Comics was taken over by his son Bill Gaines, who transformed the company (now known as EC Comics) into a pioneer of horror, science fiction and satirical comics.

Maxwell Charles Gaines was described as a "hard-nosed, pain-wracked, loud aggressive man". (MW pg. 42) At age four, Gaines had leaned out too far from a second story window and fell to the ground, catching his leg on a picket fence. The leg would give him pain and discomfort for the rest of his life, aggravating his disposition. As an adult he developed a vicious temper, and according to his son, William M. Gaines, "expected the worse from his son and was rarely disappointed." Gaines continually reinforced this belief by venting his frustrations on the boy, beating him savagely with a leather belt while shouting, "You’ll never amount to anything!".[citation needed]

Gaines, who bore a strong resemblance to actor Bert Lahr, had been a teacher, an elementary school principal, a munitions factory worker and a haberdasher. In 1933 he had just begun a new job as a salesperson at Eastern Color Printing, when, one day, as the story goes, in the process of throwing out some old Sunday newspapers, Max caught himself re-reading the color comics. It dawned on him that if packaged together they would make an excellent promotional device. Gaines immediately contacted Harry L. Wildenberg, Eastern’s sales manager and his direct superior. The two had been racking their brains trying to think up a promotional gimmick for one of their clients, Procter & Gamble, and a tabloid size book filled with full color Sunday comic reprints available for five cents and a label or coupon off any Procter & Gamble product, seemed like the perfect idea. "Good idea?" Gaines asked the Procter & Gamble representative. "Lousy idea." They told him. "Nobody likes it around here."[5]

Undaunted, and with Wildenberg's blessing, Gaines decided to see if he could sell his idea to other companies, naming the promotional book Funnies on Parade. Maybe Procter & Gamble didn’t like it, but other companies sure did. Over the next year Eastern was deluged with orders for hundreds of thousands of copies of the magazine, which was now given away by major retailers such as Wheatena, Canada Dry, Phillips’ Dental Magnesia, Kinney Shoes, and John Wanamaker Department Stores.[5][6]

Together, Gaines and Wildenberg "figured out how to produce a small, cheap promotional item by (a) printing eight pages on each sheet of standard newsprint tabloid size and (b) do so on the shop’s third shift, during the press downtime."[citation needed]

"The typical comic book [of the era] measured about 7 1/4 by 10 1/4, averaging sixty-four pages in length," Jules Feiffer wrote in his book The Great Comic Book Heroes., "was glisteningly processed in four colors on the cover and flatly and indifferently colored on the inside, if colored at all. (For in the early days some stories were still in black and white; others in tones of sickly red on one page, sickly blue on another, so that it was quite possible for a character to have a white face and blue clothing for the first two pages of a story and pink face and red clothing for the rest.)"[7]

This 64-page format was actually dictated by the printing presses themselves. The typical newspaper page, folded in half, produced a tabloid size, about ten by 15 inches, folding it once more, you have the comic book page, just over seven by ten inches. (Fold it once more and you have digest size.) A 64-page comic book was printed using four rolls of newsprint (and later, one roll of slick stock for the cover), each roll laced through four separate printing units, one for black ink, red, yellow and blue. On the larger presses, like the Goss City press, all the pages can be printed at the same time and automatically joined together and folded to size as they come off the press; then stapled together and trimmed. On smaller presses, the pages are run in segments, and then inserted one section within the other before finishing.[citation needed]

With the book’s continuing success, it suddenly occurred to Gaines: "Why bring out comic books as premiums for other people when they could be sold directly to kids, and I can collect the profits?"[citation needed]

In February 1934, Gaines went to George[who?] at Dell (instead of Wildenberg at Eastern) to put together the book now called Famous Funnies. Delacorte already had experience in the field, as well as having a huge backlog of material to pick from. Gaines' true contribution was suggesting the book be half-tabloid size. George agreed and backed a printing of 35,000 copies of the 64-page comic book-sized magazine.[citation needed]

Gaines was the first to distribute through newsstands.[citation needed] His Funnies on Parade and Famous Funnies offered reprints of Sunday newspaper comics, such as Famous Funnies: A Carnival of Comics featured reprints of Reg'lar Fellers, Dixie Dugan, Joe Palooka, The Nebbs, Keeping Up with the Joneses, Somebody's Stenog and Hairbreadth Harry.

In 1938, Gaines and Jack Liebowitz began publishing comics with original material under the name All-American Publications. At the time, Liebowitz was the co-owner with Harry Donenfeld of National Allied Publications, the precursor company to DC Comics, and Donenfeld financed Gaines' creation of All-American. All-American published several superhero/adventure anthologies such as All-American Comics and Flash Comics, as well as other titles. For a time, All-American and National shared marketing and promotional efforts as well as characters. Several of National's characters (Starman, Doctor Fate, The Spectre) appeared alongside All-American's Green Lantern, Wonder Woman and Hawkman in that company's successful All Star Comics.

Gaines used the proceeds from the sale of All-American to establish another comics line, Educational Comics. EC Comics continued All-American's Picture Stories from the Bible and added new titles such as Picture Stories from American History. Gaines soon expanded the line with humor and funny animal books such as Land of the Lost, Animal Fables and Ed Wheelan's Fat and Slat. Some of these books carried a slightly revised publisher logo which changed the "Educational" in EC to display the Entertaining Comics insignia.[citation needed]

In mid 1947 at Lake Placid, New York, Gaines, his friend Sam Irwin and Irwin's son were struck by a speedboat. Gaines died in the accident, but saved Irwin's son by throwing him into the back of the boat at the last second. The operator of the speedboat was not prosecuted.[2]

Although it continued to advertise and sell back issues of the Educational titles, Bill Gaines concentrated on adding new titles to the Entertaining Comics line. He replaced the juvenile humor books with titles pitched to an older audience and strongly influenced by his own love of popular culture. These spanned several genres as he made a transition from romance (Modern Love) and Westerns (Gunslingers) to science fiction (Weird Science), horror (Tales from the Crypt) and satire (Harvey Kurtzman's Mad).

In 1985, Max Gaines was posthumously named as one of the honorees by DC Comics in the company's 50th anniversary publication Fifty Who Made DC Great.[8]

Retrieved from "https://heykidscomics.fandom.com/wiki/Max_Gaines?oldid=462126"
Community content is available under CC-BY-SA unless otherwise noted.