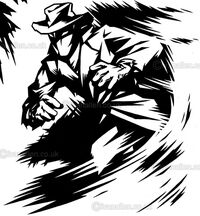 Maxwell Stockbridge was a pseudonym used by various Marvel UK writers, beginning with Editor-in-Chief Alan McKenzie, when writing text stories-mostly featuring the vigilante Night Raven-for their various monthly black & white anthology magazines. The fact that Stockbridge was not a real person was not made widely known, though the more astute readers noticed that his writing style changed dramatically from time to time, notably becoming somewhat simplified and trashy around the time Alan McKenzie was replaced as EIC by Paul Neary. It is probably not a coincidence that a village called Stockbridge became a recurring location in Marvel's Doctor Who Monthly around this time, and that one of the village's more notable inhabitants was a man named Maxwell Edison.

Retrieved from "https://heykidscomics.fandom.com/wiki/Maxwell_Stockbridge?oldid=1513641"
Community content is available under CC-BY-SA unless otherwise noted.