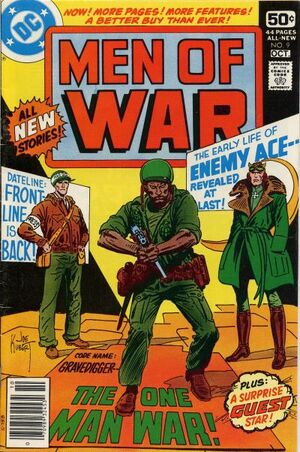 You murdered the Englander! He was defenseless -- out of ammunition! Butcher! You are a disgrace to the corps!

Code Name: Gravedigger fakes his own death for a mysterious plan. He recalls how he got there, attempting to assassinate Winston Churchill for reasons he couldn't remember, but discovering that Churchill was actually the Unknown Soldier in disguise. The Unknown Soldier defeats him, and Gravedigger wakes up in a straight jacket and a padded cell. He is soon released and debriefed - everything went according to plan, leading up to his reflection of his faked death. While staring at his own grave, a few men appear. They inform Gravedigger that Birch has been located in the clutches of the Nazis, and that he is to either free him if he can, or kill him if he can't.

Enemy Ace is returning to the castle where his father lies dying when he enters into a dogfight. The last remaining British pilot signals that he is out of ammo, so the Ace lets him go but another German pilot, Bruno Kessel, guns him down in cold blood. The Ace forces the Bruno's plane down and confronts him and strikes him. Bruno takes offense to the Ace's audacity and the two agree to duel the following day. The Ace returns to the Castle and sees his father. He goes for a ride with his falcon and Nurse Kristina where they briefly encounter Hans' friend the Black Wolf. They return from their ride in time to see a French plane gun down Hans' poor old father. The Ace realizes that the French pilot must have recognized his Fokker Dr.I and was gunning for him. The Ace vows that the Frenchman will pay for his error with his life.

Wayne Clifford is ready to do some serious reporting, but the regiment he's with can only talk about a bath-tub that they captured from Shiek Abi Ben Nasser.

Retrieved from "https://heykidscomics.fandom.com/wiki/Men_of_War_Vol_1_9?oldid=1443649"
Community content is available under CC-BY-SA unless otherwise noted.