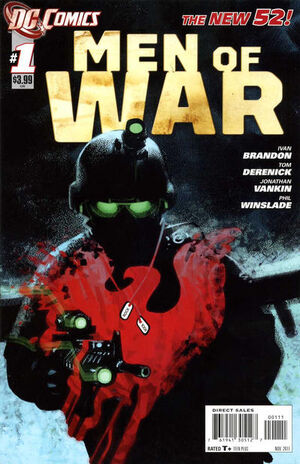 In the army they teach you to plan. Order as a response to chaos. A planned approach to the unknown. Sometimes your plans catch fire.

On the ground and on the front lines, a young, headstrong soldier known as Joe Rock assumes command of Easy Company - a team of ex-military men turned contractors.

Will they survive the battle-scarred landscape carved by the DCU's Super-Villains? Find out in this explosive new series from Ivan Brandon (Viking, DOC SAVAGE) and Tom Derenick (JUSTICE LEAGUE OF AMERICA)!

Retrieved from "https://heykidscomics.fandom.com/wiki/Men_of_War_Vol_2_1?oldid=1501251"
Community content is available under CC-BY-SA unless otherwise noted.