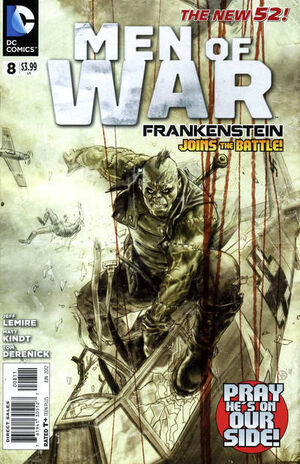 Surrender Nazi scum, or Frankenstein will ride the lightning of vengeance down your foul throats!

Appearing in "Frankenstein and G.I. Robot!"Edit

Synopsis for "Frankenstein and G.I. Robot!"Edit

In December 29, 1941, S.H.A.D.E. Agent Frankenstein participated in the Battle of the Blitz over London and wiping out an entire Luftwaffe squadron. His battle is overseen by Father Time and Prime Minister Winston Churchill, who the latter is nevertheless impressed. Father Time later receives a urgent communique from Agent Shrieve concerning his reports from Japan. He then dispatches Frankenstein to the Far East, where he will work alongside with the Bride.

The Bride soon discovers that there will be a Japanese attack on New York City. She infiltrate a secret Japanese military base at Mt. Fuji, where she rescues Dr. Robert Crane. But Crane informs her that his creation, the Japanese Attack Killer Elite (J.A.K.E.), is set loose.

Off the coast of Japan, Frankenstein and Father Time spots the robot from their submarine that is swimming right towards them. Frankenstein is then literally launch from the submarine and engages J.A.K.E. At the same time, Crane observes the battle through J.A.K.E.'s optics and have a resolution in overriding his creation that he secretly planned while under Japanese captivity. J.A.K.E. is broken from his programming and renames itself as the Joint Allied Killer Elite, who now joins on the side of the Allies.

After Frankenstein and J.A.K.E. are brought on board, Father Time is at first rather dubious of J.A.K.E.'s change of loyalty but is otherwise insist of its trust by Frankenstein and that the robot is unable to tell a lie. To prove J.A.K.E.'s allegiance, Father Time needs J.A.K.E. the information on the actual Japanese attack on New York. J.A.K.E. comply and reveal that it was sent as merely a distraction for S.H.A.D.E. and Dr. Crane had only scant details on a top-secret operation code-named "Motalla", and may be already too late to stop it.

In New York, "Motalla" is revealed to be a giant monster that have grown out of the water in the city's harbor after being planted by a Japanese agent. Frankenstein and J.A.K.E. timely arrive by plane. J.A.K.E. assess that the creature lacks underwater breathing and potential for drowning. J.A.K.E. is tow by Frankenstein as it serves itself as bait for the creature to lead it out to sea. After it is lured, it sinks into the water but it devour J.A.K.E. However, Frankenstein dives in and cuts through the creature, and rescuing J.A.K.E.

Since that day on, a strong bond was developed between Frankenstein and J.A.K.E. as their fates are entwined for decades as they fought side by side.

Retrieved from "https://heykidscomics.fandom.com/wiki/Men_of_War_Vol_2_8?oldid=1614827"
Community content is available under CC-BY-SA unless otherwise noted.