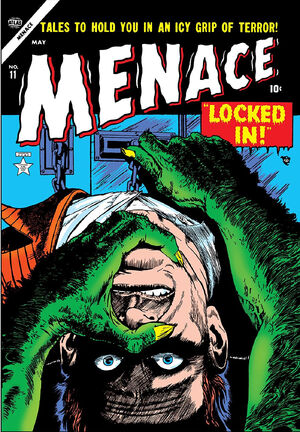 Appearing in "I, the Robot"Edit

Synopsis for "I, the Robot"Edit

A brilliant professor has juts completed his latest invention, a robot that follows commands that are broadcast to it through a special frequency. The scientists business manager is pressuring the genius to sell the invention by the end of the month, telling him that it could easily earn them five million dollars, however the scientist declines as he will not release his invention to the world until he is sure it is operating perfectly.

Left to his work, the scientist activates his robot and orders it to pick up a chair through the special command microphone. The robot follows the orders perfectly, almost too perfectly, as after it picks up one chair it picks up another, and another. The scientist is upset that his creation is still not complete as it continues to follow it's instructed orders over and over. Seeing that there is room for improvement the scientist orders the robot back to its slab. The scientist then leaves to create an important regulator component that he believes will correct the error.

Later that night, the scientist's business manager breaks into the lab intent on taking the robot and selling it himself. Inspecting the robots inner workings the greedy business manager then takes the special command microphone and flees the lab. Later when the scientist returns to his lab with the completed regulator he begins to try to install it when suddenly the robot is ordered to kill the man in the room. The robot obeys the command and strangles his creator to death before he has time to install the device.

With the scientist dead, the business manager enters the room to collect the robot, but suddenly the robot attacks and strangles him to death as well. With both men dead, the robot walks out into the world to full fill the last order his was given: Kill the man in the room. It goes out to seek men in rooms to kill.

Appearing in "A Fate Worse Than Death"Edit

Synopsis for "A Fate Worse Than Death"Edit

A space explorer takes a poison capsule after learning a hideous female alien has selected him for her mate upon reaching her maturity day. When she reaches this day, she changes her form to that of an attractive Earth woman just as the regretful man gasps out his last breath.

Appearing in "Only A Beast"Edit

Synopsis for "Only A Beast"Edit

A bed-ridden old man hates those who will inherit his money so he establishes hypnotic control of his dimwitted caretaker and convinces him that he loves the woman and her husband is mean to her, so must kill those who harm the one he loves. He knifes the man, but the woman screams, so he is given the hypnotic command to strange her. This makes him hate the old man since he has made him kill the one he loves so he tears his throat out like a beast.

Appearing in "My Other Body"Edit

Synopsis for "My Other Body"Edit

A man's conscience convinces him to steal money from a jewelry store for his girlfriend and then to commit suicide out of remorse for the act.

A woman trails after her husband for twenty years because, after they murdered a family, he skipped out on her with the loot. She kills Bill, but then the spirits appear and keep her prisoner in a filthy hovel, just like all those hermits she interviewed for twenty years while searching for her husband.