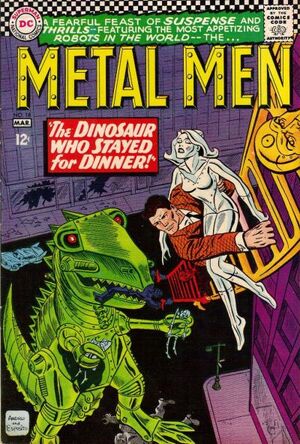 We're late for our benefit show at the ward for violent comics writers!

Appearing in "The Dinosaur Who Stayed for Dinner"Edit

Synopsis for "The Dinosaur Who Stayed for Dinner"Edit

Doc Magnus receives a dinosaur charm bracelet from an unknown admirer. The dinosaur comes to life and grows to giant size. The Metal Men try to destroy the beast, but Tina befriends it instead by feeding it dinner. When the robot dinosaur then tries to eat Doc and Tina, the other Metal Men knock it out. The robot revives and abducts the Metal Men. It takes them to an alien planet where they meet the dinosaur's robot inventor. The inventor wants to replace Doc and court Tina. Tina sees through the act and scorns the robot's affections. The angered robot tries to throw Doc and Tina in a boiling cauldron with the other Metal Men. However, the other robots, now alloyed together, prevent Doc's incineration. The robot dinosaur is ordered to take the Metal Men into deep space, but instead he returns them to Earth, disobeying his creator.

Retrieved from "https://heykidscomics.fandom.com/wiki/Metal_Men_Vol_1_18?oldid=1443689"
Community content is available under CC-BY-SA unless otherwise noted.