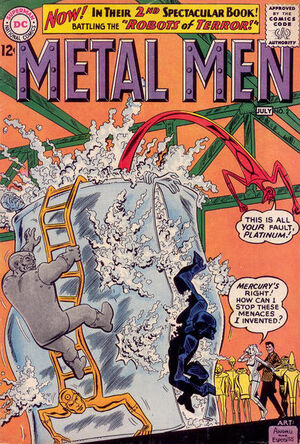 "Fizz them to death, Sodium!"

Appearing in "Robots of Terror!"Edit

Synopsis for "Robots of Terror!"Edit

Platinum, tiring of being rejected by Doc, built herself a more attentive robot Doc Magnus. But something short-circuited in the process, and the robot Doc, naturally an inventor also, decided to make its own set of Metal Men and attack humanity. These "robots of terror" were Aluminum, Barium, Calcium, Zirconium, Sodium, and Plutonium. The Metal Men battle one of the robots each and are mutually destroyed. Tina takes the robot Doc and Plutonium robots to the Moon, where Plutonium is detonated.

Retrieved from "https://heykidscomics.fandom.com/wiki/Metal_Men_Vol_1_2?oldid=1443673"
Community content is available under CC-BY-SA unless otherwise noted.