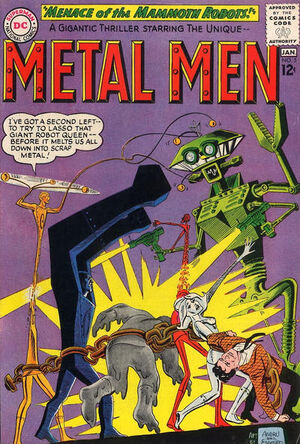 Appearing in "Menace of the Mammoth Robots!"Edit

Synopsis for "Menace of the Mammoth Robots!"Edit

The robot queen and her subjects designs that appeared in both this and a earlier issue is shown in Wonder Woman Vol 1 136, where they were known as The Machine Men. Their appearance was identical to the Robot Queen, except for both color and the crown-antenna.

Retrieved from "https://heykidscomics.fandom.com/wiki/Metal_Men_Vol_1_5?oldid=1443676"
Community content is available under CC-BY-SA unless otherwise noted.