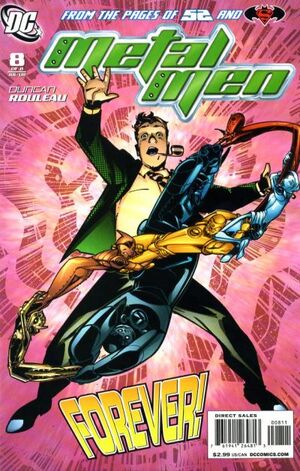 Appearing in "A Matter of Time"Edit

Synopsis for "A Matter of Time"Edit

It's the incredible pulse pounding climax to the 8-issue miniseries as the mysterious alchemist known only as the Nameless makes his strongest bid yet to twist the Metal Men's technological souls to his will! Can Magnus and his Metal Men resist? Or are America's favorite knights of tomorrow to be reforged into the death-dealing machines of Earth's destruction?

Retrieved from "https://heykidscomics.fandom.com/wiki/Metal_Men_Vol_3_8?oldid=1443739"
Community content is available under CC-BY-SA unless otherwise noted.