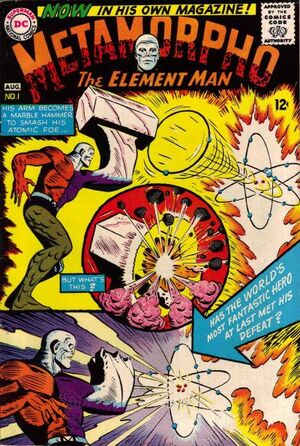 You romantic booby!... I'll teach you to betray me!

Appearing in "Attack of the Atomic Avenger"Edit

Synopsis for "Attack of the Atomic Avenger"Edit

Rex Mason and Sapphire Stagg have dinner at a posh charity ball. He openly demonstrates the use of his powers by turning his hand into a copper bowl to catch a spilled platter, and later by chilling a wine bottle with hands of solidified carbon dioxide.

After dinner, Rex and Sapphire are walking home when they see a school bus teetering over the edge of an elevated highway. As Metamorpho, Rex turns himself into a ramp and lowers the children to safety. He then entertains them by transforming into a variety of humorous shapes.

While playing with the kids, Metamorpho notices a fake telephone wire that leads to a nearby bank. Investigating further, he determines that the electric line is inter-connected with several banking institutions. The lines project a series of energy patterns that interlock forming a force field between the bank staff and the vault. At which point, a group of thieves enter the bank and attempt to rob it. Fortunately, Metamorpho is present and is able to stop them. He then traces all of the false power lines to a central generator and destroys it, preventing the thieves from being able to use this force field technology ever again.

Some time later, Rex brings Sapphire home to Stagg Mansion. He pesters Simon Stagg about the work he's supposedly doing on finding a cure for his elemental condition. Stagg dodges the question and consults with his servant Java.

What none of them realize is that one of Simon's former lab assistants, Kurt Vornak, has been secretly spying on them. Vornak is the genius behind the force field bank robberies and he years for nothing more than to avenge himself against Simon Stagg. Upon learning that Stagg has been working on a means to cure Metamorpho, Vornak sneaks into Simon's laboratory intent on finishing Stagg's work. He wants Metamorpho out of the way just as much as Simon does. Java discovers Kurt skulking about the lab, and threatens to hurt him, but Vornak convinces the Neanderthal that he actually wants to sabotage Simon's machines. Java is as much in love with Sapphire Stagg as Metamorpho. If Metamorpho cannot become normal again, then he can never truly be with Sapphire, which would make her available for Java's amorous advances. Java leaves Vornak in the lab to continue his work. His experiments fail however, and the machine explodes, transforming Kurt Vornak into a being of pure atomic energy.

Vornak's essence spreads throughout the city and he attacks Metamorpho, Java, Sapphire and Simon. He uses his atomic powers for a wide variety of effects including transforming Simon's new Stagg Enterprises office building into a pile of molten metal. Sapphire is standing too near the building as it begins to melt, but Java heroically leaps after her, carrying her out of harm's way. Vornak then turns his sights on Java, transforming him into an inert fossilized statue.

Simon Stagg determines that the only way to stop Vornak is with an atomic weapon. He produces a triggering mechanism and tells Metamorpho that he must act as the catalyst to generate the explosion that will destroy Vornak. They coral Vornak's form to a tunnel tube that runs beneath the river. Grabbing the detonator switch, Metamorpho transforms into a cobalt projectile and launches himself at Vornak. There is a tremendous explosion and it appears that both Vornak and Metamorpho are destroyed in the blast. Simon Stagg gathers up the immobile Java and trace residue of Metamorpho. He promises Sapphire that he will do everything in his power to reconstitute him.

Retrieved from "https://heykidscomics.fandom.com/wiki/Metamorpho_Vol_1_1?oldid=1498194"
Community content is available under CC-BY-SA unless otherwise noted.