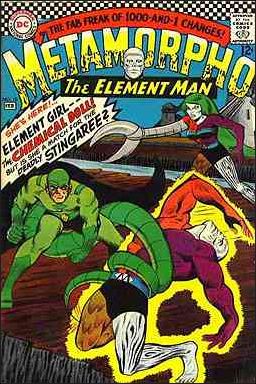 Appearing in "The Sinister Snares of Stingaree!"Edit

Synopsis for "The Sinister Snares of Stingaree!"Edit

The wedding of Metamorpho and Sapphire Stagg is interrupted by Element Girl, a female version of Metamorpho, who enlists him in a battle against Stingaree and his evil organization, CYCLOPS.

Retrieved from "https://heykidscomics.fandom.com/wiki/Metamorpho_Vol_1_10?oldid=1498261"
Community content is available under CC-BY-SA unless otherwise noted.