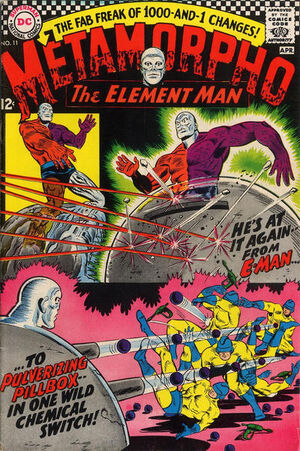 Appearing in "They Came From... Beyond?"Edit

Synopsis for "They Came From... Beyond?"Edit

Metamorpho and Simon Stagg are assigned by the president to investigate flying saucers buzzing the United States, and discover the “aliens” are really an Earth criminal and his gang out to conquer America.

Retrieved from "https://heykidscomics.fandom.com/wiki/Metamorpho_Vol_1_11?oldid=1498263"
Community content is available under CC-BY-SA unless otherwise noted.