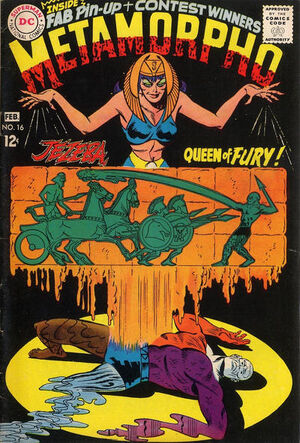 Sapphire Stagg marries wealthy Wally Bannister, and Metamorpho breaks away from Simon Stagg with some help from Element Girl. He is then recruited by a mysterious man known as Mr. Shadow to seek out the hidden valley of Ma-Phoor. There, he encounters Jezeba, its queen, who looks just like Sapphire, and claims to be over 2,000 years old, she identifies him as Algon, The Ancient Element Man, a hero from the past.

Retrieved from "https://heykidscomics.fandom.com/wiki/Metamorpho_Vol_1_16?oldid=1498273"
Community content is available under CC-BY-SA unless otherwise noted.