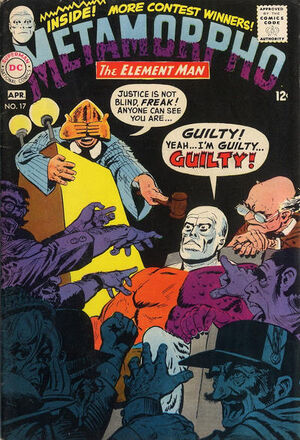 Appearing in "Last Mile for an Element Man"Edit

Synopsis for "Last Mile for an Element Man"Edit

Metamorpho is tried, sentenced, and “executed” in a freezing chamber for the murder of Wally Bannister, Sapphire’s late husband. He is broken free by Element Girl, despite the intervention of the Prosecutor, a fanatic super-criminal who framed Metamorpho on behalf of a mysterious “client”. Metamorpho and Element Girl meet Algon, the Element Man of Jezeba’s time, who dies shortly after telling them that he committed the murder of Bannister. The two elemental heroes set out to find the Prosecutor and his client to clear Metamorpho’s name. But the “client”, speaking from within a cocoon, tells the Prosecutor he has failed and menaces him with deadly insects.

Retrieved from "https://heykidscomics.fandom.com/wiki/Metamorpho_Vol_1_17?oldid=1498275"
Community content is available under CC-BY-SA unless otherwise noted.