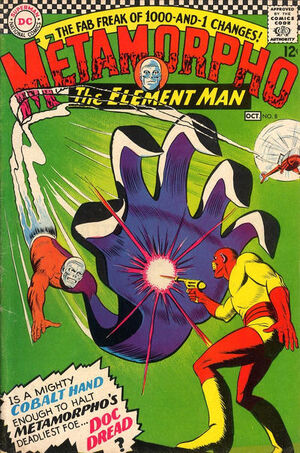 Metamorpho assumes the new identity of Dyna-Man and uses it to infilatrate the criminal gang of Doc Dread. After participating in several crimes with Dread's cronies, Rex's identity is revealed when his rival Java seemingly betrays him. Sapphire comes to Metamorpho's aid to stop the criminals.

Retrieved from "https://heykidscomics.fandom.com/wiki/Metamorpho_Vol_1_8?oldid=1498237"
Community content is available under CC-BY-SA unless otherwise noted.