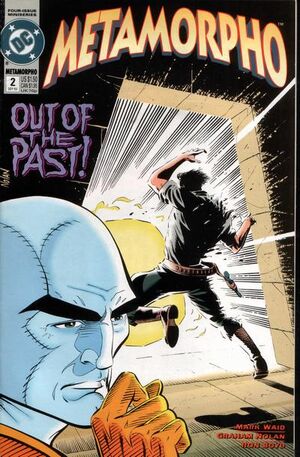 Metamorpho and Jillian Conway have determined that Peter O'Grady of the Irish Republican Army is responsible for stealing the Orb of Ra. They book passage on an airplane that takes them to Ireland. Metamorpho reunites with an old buddy named Sean who points him in the direction of O'Grady's last known whereabouts.

Back in the states, Java flies into a rage over the fact that Metamorpho had abducted his son from Stagg's special nursery. Simon Stagg tries to calm the Neanderthal down, but Java shows a rare display of defiance. Disappointed in Java's unruly behavior, Stagg shoots him in the head, killing him. Sapphire walks into the study and finds her husband dead on the floor. Simon claims that he shot him in self defense.

Back in Ireland, Metamorpho and Jillian go to a pub named Cohen's and begin asking questions. The patrons don't take kindly to Metamorpho's presence, and some of them decide to voice their displeasure through violence. One of the men runs into a back room to warn Peter O'Grady that Metamorpho is looking for them. Metamorpho meanwhile, continues fighting against the thugs. Jillian tries to help out, but she has yet to acquire mastery over her own abilities. When the dust finally settles, Peter O'Grady emerges from the back. He grabs the infant Joey Mason and holds a gun to his head.

Retrieved from "https://heykidscomics.fandom.com/wiki/Metamorpho_Vol_2_2?oldid=1498206"
Community content is available under CC-BY-SA unless otherwise noted.