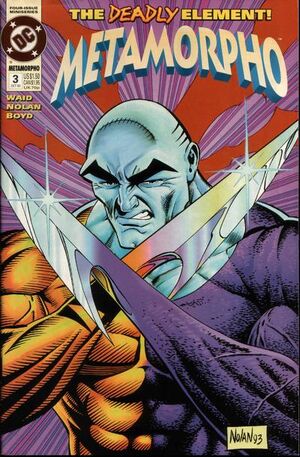 All the pyramids in all the deserts in the world... and you had ta walk inta mine.

Peter O'Grady holds a gun to the infant Joey Mason's head and warns Metamorpho and Jillian Conway to back off. Instead though, the metamorphae spring into action, and Rex is surprised at how readily Jillian takes to her newfound powers. After saving Joey and getting the drop on O'Grady, Rex pressures him to tell him where to find the Orb of Ra. O'Grady tells him that he sold it to an Egyptian collector named Emir Abd-Al-Aziz.

Rex and Jillian than fly to Kathtan where they speak with the Emir. Aziz and Rex go way back and he is happy to turn the Orb over to him. Upon closer inspection however, Rex determines that the Orb in Aziz's possession is a fake. A shocked Aziz tells Rex that he had it authenticated by a collector name Delacroix.

Rex and Jillian then head off to Morocco where they find Delacroix in a café in Casablanca. After threatening to expose him to poison from a black scorpion, Rex learns that the real Orb of Ra had been returned to its original resting place in Egypt.

Soon after, Rex discovers that Jillian had not been completely forthright with him with regards to the Orb. While her notes did state that the Orb could possibly cure Joey's condition, she neglected to tell him that its power could only be used once. Rex knows that Jillian intends on using it to cure herself. Rex confronts her in her hotel room and the two get into a massive fight. The room explodes, but just before Metamorpho passes out, he finds out who Jillian's true employer is - Simon Stagg. Stagg appears before him and takes hold of Joey.

Retrieved from "https://heykidscomics.fandom.com/wiki/Metamorpho_Vol_2_3?oldid=1498209"
Community content is available under CC-BY-SA unless otherwise noted.