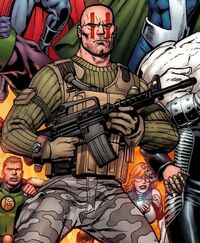 Michael Cray was born to a US Navy Admiral. He has a brother named Alexander. His parents were slain by terrorists and he joined the military to avenge their deaths. He became a Navy SEAL prior to being transferred to International Operations' newly formed Team 7. Like all members of that group, he was a highly experienced Special Forces operative.

The team had been sent on a mission (or so they believed) when in reality they were sent to be exposed to the Gen Factor by Miles Craven (head of I.O.). Unlike the other surviving members of Team 7 (not everyone survived the exposure to the Gen Factor treatment), Michael's powers did not manifest until many years later. Despite the lack of power, he would fight for his teammates, such as taking a Naval officer hostage when the other powered-members of Team 7 were literally being nuked as a test (they got through). When the majority of Team 7 went underground (with their families), Cray continues to serve I.O. (as did John Lynch, Jackson Dane & Backlash). Miles Craven assigns Cray to the Special Operations Group. He did many wetwork and blackbag assignments for them.

Michael Cray left I.O. when he was diagnosed with a brain tumor. He wanted to atone himself for all the innocent men and women he killed during his missions. He got his chance when he became involved with the Order of the Cross. Their adversary, the Black Angel awoke, a demonic entity bent on killing a young boy with miraculous abilities. It turned out that Cray's cancer was in fact a result of the Gen Factor, giving him regenerative abilities. It would also give him the ability to manifest psionic shields to protect himself, but he could not control it and was not even aware it existed. Cray defeated the Black Angel with the help of Sister Mary, a former police officer turned nun, Gabrielle D'Angelo, his ex-wife who had become a vessel for the archangel Gabriel, and several of his Team 7 colleagues. After the death of the Black Angel, the young child restored the damage he had done by rewriting reality, but in the new reality, Gabrielle had died during their honeymoon.

Michael spent time working for Rayna Masters, who ran a bodyguard agency called 'Executive Protection Services'. Cray then was involved in the Brothers In Arm incident as Craven went after all the surviving members of Team 7. Cray also dealt with alien forces who were pursuing keys to an ancient warship. On a Team 7 mission long ago, Cray had actually found one of the keys, sticking up out of the mud.

Deathblow died during the Fire from Heaven event, sacrificing himself in order to kill Damocles.[1] After the events of Captain Atom: Armageddon and the Worldstorm, Deathblow was revived.

During the events of World's End, Cray was part of Stormwatch: Post Human Division leading missions on a post-apocalyptic Earth. He later regrouped with John Lynch and the other former members of Team-7, and learned of Tao's nihilistic intentions and joined in Lynch's mission in stopping him. After teaming up with the Wildcats and following Tao's defeat, Cray was among the few heroes to leave Earth on the Authority's departing Carrier. Subsequently, he became an official member of the re-rostered Authority.