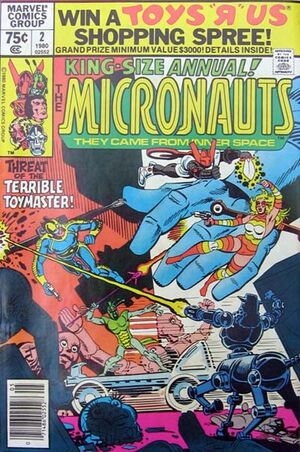 Hey, Mom—lookit all the neat, new Micronaut toys! ... There's my favorite—an Acroyear warrior! ... except that this one's glowing!

Appearing in "The Terrible Toymaster!"Edit

Synopsis for "The Terrible Toymaster!"Edit

The Endeavor, with all the Microns aboard, flies into New York Harbor. Acroyear develops a sudden headache, so severe that he screams. In the toy department at Macy's Department Store, Tommy Clark admires the newly arrived Micronauts toys, but he's mystified by a glowing Acroyear ... as is Mr. Karamatsu, a representative of the toy company. A hooded figure in the shadows (Toymaster) fires a beam at the other toys, and they glow as well. The real Acroyear swings his sword, endangering his comrades, and then takes his glider pack to seek out the source of his pain. Biotron consults the sensors and finds an strange energy field coming from the city. While Arcturus Rann and Princess Mari follow Acroyear with their own glider packs, Biotron follows the energy. Both trails lead to Macy's, where the Micronauts toys have come to life and are attacking customers. Toymaster thinks about how the toy company followed his notes and thus gave him control over the toys.

Rann and Mari arrive at the toy department. Rann gets a headache as well. Bug, riding atop the Endeavor, gets knocked off and lands on an escalator, where he's inexorably drawn toward the "toothed grating." Toymaster notices the Microns and guesses that his beam will control them as well as the toys. Biotron and Microtron also get headaches, and since Biotron is piloting the Endeavor at the time, the ship crashes.

Bug uses his rocket-lance to blast the OFF button on the escalator. He reaches the next floor, hops a ride on a roller skate, and blasts Toymaster. A Kronos zaps Bug and knocks him into an aquarium, where a Sharkos attacks him. Prince Shaitan in a Battle Cruiser comes after Acroyear, but the plastic toys are no match for Acroyear's energy blade. A Space Glider (modeled after Rann, her lover) and then Force Commander (modeled after Prince Argon, her brother) attack Mari. A Hornetdroid and a Terraphant attack Biotron. Biotron and Microtron attack Microtron. Baron Karza attacks Rann, while Toymaster gloats over his defeat.

Acroyear confronts Toymaster, who shoots a hole in the aquarium, thus freeing Bug. Bug blasts Toymaster again and blows off his mask. Their mystery opponent is ... Phillip Prometheus, the only Earthling who could know enough about the Microverse to create a line of toys based on its inhabitants. When last seen (Micronauts #8), Prometheus seemed mentally unhinged by his trip to the Microverse. Committed to an asylum by NASA, he calmed down and began building reproductions of the things he had seen. Once released, he submitted his designs for "toys" to a toy company and designed a "control chip" for each figure that would allow him to control them. The toy company obligingly put the chips in the toys.

Prometheus fires his beam again, rendering Rann and Acroyear helpless. Mari, who is not one of the toys and thus immune to Prometheus's beam, grabs Acroyear's sword and slashes Prometheus's face. Rann fires a warning shot, which sets up Prometheus for Bug's rocket-lance. Prometheus, hit point-blank, falls down an elevator shaft. The Microns flee the store. Karamatsu tells the toy department manager that his company will fix the designs and add two new figures (Mari and Bug). The manager says, "do you think you can have them ready by Christmas?"

Retrieved from "https://heykidscomics.fandom.com/wiki/Micronauts_Annual_Vol_1_2?oldid=1446318"
Community content is available under CC-BY-SA unless otherwise noted.