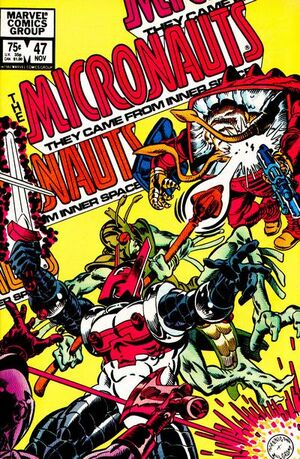 The rebellion continues on homeworld, as Commander Rann learns the terrible history of the Soul Survivors, humanoids from the Microverse who he inadvertently led to believe he was a god thousands of years ago, and who have now evolved into soul sucking monsters who worship the 'Time Traveler'! Then, a giant robot ship in the shape of the late Biotron arrives...

Retrieved from "https://heykidscomics.fandom.com/wiki/Micronauts_Vol_1_47?oldid=1446370"
Community content is available under CC-BY-SA unless otherwise noted.