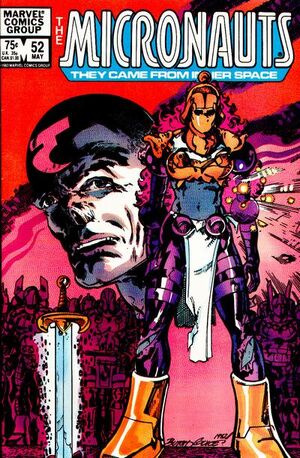 ...It is of no importance. Boil them DeGrayde! Quite a fish-fry eh, DeGrayde?

Appearing in "Harm Is Where the Heart Is!"Edit

Synopsis for "Harm Is Where the Heart Is!"Edit

As Baron Karza wreaks havoc on Homeworld, killing all but one of the population of Seazone, Acroyear is forced to fight his beloved Cilicia, who accuses him of betraying his race.

Retrieved from "https://heykidscomics.fandom.com/wiki/Micronauts_Vol_1_52?oldid=1446375"
Community content is available under CC-BY-SA unless otherwise noted.