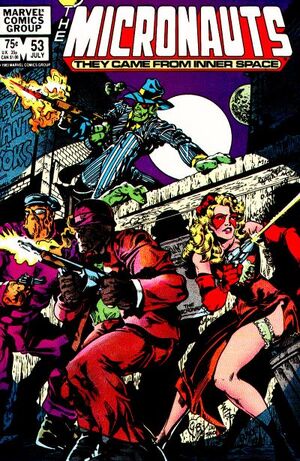 ...and it's in that forlorn hope that you've turned the man I love ... the leader of the Micronauts... into a mumbling, meditating monk!

Commander Rann's band face danger, gangland style, as they find themselves on a prison world planet resembling earth where the only form of law and order is "The Untouchables."

Retrieved from "https://heykidscomics.fandom.com/wiki/Micronauts_Vol_1_53?oldid=1446376"
Community content is available under CC-BY-SA unless otherwise noted.