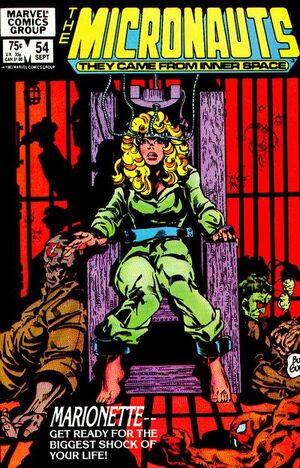 Freedom is the right to live as individuals, safe from physical or psychological oppression! It's the opportunity to make your own laws... not to have them imposed on you.

The Micronauts Mob plan to bust out from the gangster-run Prison Planet, only to be sentenced to death by a three-headed robot judge called, Tri-bunal.

Retrieved from "https://heykidscomics.fandom.com/wiki/Micronauts_Vol_1_54?oldid=1446377"
Community content is available under CC-BY-SA unless otherwise noted.