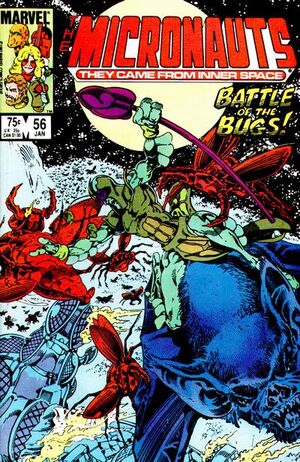 Appearing in "The Conquest of Kaliklak!"Edit

Synopsis for "The Conquest of Kaliklak!"Edit

The Micronauts have second thoughts when they return to Bug's planet, Kaliklak. They meet the sister of his past girlfriend, find the planet being invaded by Battle-Beatles and the new queen is in danger too.

Retrieved from "https://heykidscomics.fandom.com/wiki/Micronauts_Vol_1_56?oldid=1446379"
Community content is available under CC-BY-SA unless otherwise noted.