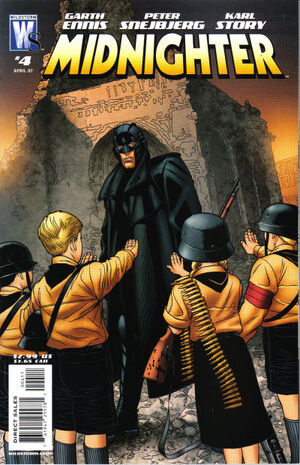 -- Midnighter, after the Hitler Youth mistook his advice.

Midnighter observes behind the scene of a Russian tank division advancing through the war-torn streets of Berlin. To his surprise and shock, he sees a group of four young Hitler Youths taking out the tanks. The Youths are then subsequently subdued and prepared to be slowly executed by Soviet soldiers. Midnighter, after momentarily leaving the children to their fates, act out of his own conscience and beats up the soldiers and saving the children. The children, briefly surprise of Midnighter's action, salute him as they mistook him for a German official. Annoyed by the Youths' naivety, Midnighter want them to learn to stop idolizing Hitler given Berlin's situation and the dictator's horrible deeds. However, the Youths disbelieve him and thinks that he is playing them as a test of sort, much to Midnighter's aggravation. He then simply ordered them to keep heading west and never engage in combat unless being attacked. As the Youths begins to leave, one of them ask Midnighter to give his regards to Hitler for the number of tanks they have destroyed.

Midnighter sneaks past German defenses and arrives at the Fuhrerbunker. He then meets a drunken soldier who (mistaking him for one of their men) shows him a scene of an orgy, as the men and women have given up on Germany's war effort. The man tells Midnighter that Hitler is beyond a door from the very room they're in. Midnighter then notify the soldier about the child soldiers he encountered, in which the soldier doesn't show any sympathy for them and simply state that they should "make the most of it." Midnighter then kills him and proceed to find Hitler. After overhearing two officers talking about some Nazi officials such as Martin Bormann and Joseph Goebbels of their affairs, Midnighter follows them to Adolf Hitler where to his surprise finds the dictator to be a poor, beaten and very sad old man. As Hitler heads to his room to commit his suicide, he sees Midnighter and question him if he had saw him before. Midnighter reply no and Hitler, and along with Eva Braun walks into the room.

Sometime later, Hitler's body is burn in a pyre and watched by those who and aren't celebrating their debauchery. One of the onlookers enthusiastically gives Midnighter a bottle of brandy.

Midnighter arrives back to the Time Police where they are finishing up repairing their vehicle. Midnighter offers Bonnie the same brandy he was given before the two sit down and talk. Midnighter discuss his decision of not killing Hitler and that the dictator's inevitable end is no different from Midnighter's situation with the bomb still strapped inside by Anton Paulus. Bonnie raise his spirit by recalling her job of patrolling history and tells him that either he is going to accept his fate or stop Paulus, in which Midnighter agrees on the latter. Midnighter then tells Bonnie that he just had an idea...