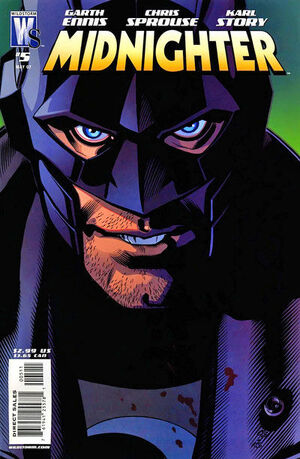 A old man by the name of Alfred Wolfrum, formerly of the Grossdeutschland Panzergrenadiers, visit Anton Paulus' estate. He meets and tells Paulus the reason he came to him was because that ever since the Fall of Berlin in 1945, he was saved by a man in black (Midnighter) from Russian soldiers. The man told Alfred in requesting him to find Paulus sixty years later and giving him his message: "I am coming." Paulus question him why he would pass an "odd" message for so many years from the man. Alfred explains that the war was lost at its chaotic time in spite of anything that is rational and that he owed a debt to the man in black. Alfred then leaves as his savior mentioned him to do so as soon as possible.

Meanwhile, Midnighter and the Time Police cruises back to the 21st century, after Midnighter got what he wanted for his plan and swear to Bonnie that he will be return. On the way, Midnighter amusingly learns from the officers that in the 96th century there is no gender-based sexual preference at all.

In the present, Paulus have his scientists to detect Midnighter's return and it is reveal that they have intentions of leaving him behind in the past. After noticing that Rourke have been gone a long time, the said bodyguard painfully appears without his body limbs, except for his single right leg. Midnighter soon appears as he carries along with a sedated child - who is Anton Paulus' past self, preventing the older Paulus from killing his younger self without exploding Midnighter. Midnighter then used Rourke's helmet to incinerating Paulus' guards and demands Paulus to remove the bomb inside him or he will kill the younger Paulus as he doesn't even care if he will disrupt history in the process. Paulus notify Midnighter that he couldn't kill his younger self as he is never a child killer. However, Midnighter points out that even though Paulus bugged the Carrier to learn his secret, and ask if he is sure he wouldn't kill the younger Paulus. Unnerved by this, the older Paulus gives in to Midnighter's demand and has his bomb surgically remove, in which Midnighter remains awake at all times with the younger Paulus in his arm, and his second heart is placed back into his body.

Paulus' estate is soon set on fire and all of his men are dead. Midnighter brings both the younger and older Paulus outside. Midnighter then explains to the older Paulus that he had been researching about him and his family. While in the past, Midnighter went through Belsen's records office and finds that Paulus' father wasn't Jewish or any kind of innocent victim of the Nazis. He was in fact a high-ranking Nazi officer who was put in the camp with his family when he badmouthed Hitler's incompetence and boasted that he himself should be the leader of Nazi Germany. Finally, Midnighter sums up that the real reason Paulus sent him to kill Hitler during World War I was to allow his father to rise up as a very capable and most likely dangerous man than Hitler to lead Germany. Midnighter then tells Paulus to stand on his knees. Paulus does so and is then shortly decapitated by a powerful kick delivered by Midnighter.

Midnighter gives back the unconscious younger Paulus to Bonnie to be taken back to the past. He then returns to the Carrier and The Authority remains unaware of Midnighter's recent adventure, in which he doesn't mind. He states to himself that he's not a lover, a father or a friend. He's what he was bred to be, and that's the problem. He continue on his normal basis of patrolling the world by telling the Carrier to create a shift-door for him to go to Iraq.