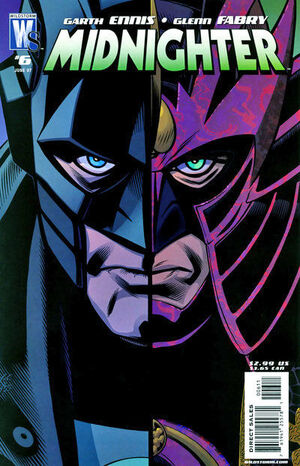 Appearing in "Flowers for the Sun"Edit

Synopsis for "Flowers for the Sun"Edit

In feudal Japan, a man that seems to be a version of Midnighter sits on a hill in a dead forest. There are bones of many dead men around the base of the hill and a group of armed nobles and samurai around the bones. "Midnighter" tells them that he's invited them to listen to a story. As soon as they're ready to hear it, he tells them.

One morning, Midnighter awoke with no memory of who he was. He was wearing black armor and had two swords. People assumed he was a ronin, but Midnighter could never remember having a master or even being trained to fight. He found himself walking near a castle when he was attacked by more than 60 guards. He killed them all and, amazingly, came out untouched. The shogun, impressed by his skill, hired him to work for him.

One day, the shogun and Midnighter were walking through the market when a man in white (Apollo) came into town. He was harassed by some drunk men who wanted to fight. Crying, Apollo tried to get them to leave him alone. They wouldn't, so Apollo raised his sword and killed them all in one single strike. The shogun sends Midnighter to talk to the man in white and he does. Apollo comes to work for the shogun and he and Midnighter soon fall in love. However, it's not meant to last.

Midnighter alone was a problem for the shogun's senior minister, but now with Apollo there, he wasn't getting enough attention. While Apollo and Midnighter are sleeping, he sends over 200 ninjas to kill them. The fight is long and hard but Midnighter survives. Unfortunately, Apollo does not. Midnighter tortures the only surviving ninja until he finds out who was responsible. He leaves the shogun's palace for a year to mourn and bury his love, but when he comes back, he drowns the minister in his own bath.

Back on the hill, which is also Apollo's grave, Midnighter tells the men gathered that every year he brings his lover flowers. Then he tells them to defend themselves. The fight is quick and at the end, a dozen hearts are resting on Apollo's grave.

Retrieved from "https://heykidscomics.fandom.com/wiki/Midnighter_Vol_1_6?oldid=1469640"
Community content is available under CC-BY-SA unless otherwise noted.