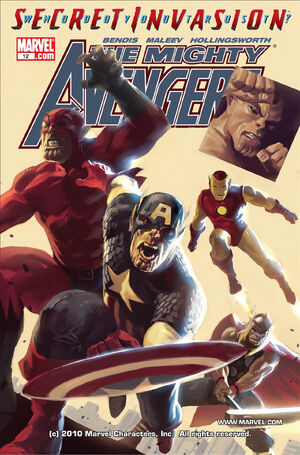 Take my advice and make yourself some of the new life model decoys. About a dozen to start. Start using them. Send them in when you feel that itch on the back of your neck. It's not cheating and it's not cowardly. It's smart thinking.

The issue begins with a flashback to when Latveria launched a counter-attack in response to the covert mission in Latveria by a Nick Fury led team that included Wolverine, Spider-Man, Daredevil, Black Widow and Luke Cage. We see an LMD of Nick Fury telling the heroes that he is done with politics. That they will never see or hear from him again. That one day they will look around and see the world like he has to and that they will know that Nick did the right thing.

We cut to one month later with Countess Valentina Allegra de Fontaine meets up with Nick Fury in his foreign hideout. Nick has a bald head as his disguise. De Fontaine says that they have earned this right to live out their lives together happily ever after. The two proceed to kiss and have sex.

We shift to de Fontaine returning back to Nick’s apartment. Nick is waiting there with his gun pointed at her. Nick asks Defontaine who she really is. De Fontaine says that Nick is acting crazy. Nick then blasts a cap in Defontaine’s head. De Fontaine’s corpse then morphs back to its original form: a Skrull. Nick is stunned.

We see Nick in invisible form spying on his own apartment. The men that the Defontaine Skrull met with are at the apartment gathering her body. They are talking in whatever language Skrulls speak. Skrullish?

Nick then tells Maria that he will be watching her. That if he ever gets the feeling that Maria is not what she is supposed to be then he will come for her while she is sleeping and she will never wake up. Nick then says that “they” are right in front of her. That “they” are right under her nose. Nick then makes a sudden and swift departure from the Helicarrier before the SHIELD agents to apprehend Nick.

We shift to two months later with Nick meeting with Spider-Woman. Jessica tells Nick that he set her up as a double agent reporting to both SHIELD and Hydra and then he screwed her over in his stupid secret war.

Retrieved from "https://heykidscomics.fandom.com/wiki/Mighty_Avengers_Vol_1_12?oldid=1446423"
Community content is available under CC-BY-SA unless otherwise noted.