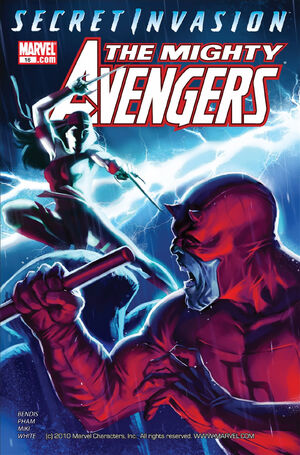 In 2005, Electro is hired by Elektra to cause a mass breakout at the Raft

However, several months earlier, Elektra is confronted by a look-alike with darker clothing. They fight and her doppelganger turns her arms stone and her head similar to the Ghost Rider. Elektra is able to impale the impostor, who turns back into a Skrull. Elektra fails to understand and disposes of the body. But later, she is confronted by Daredevil and Wolverine, who demonstrate both optic blasts and stretchablility respectively. She kills them but is attacked by an invisible Skrull, who knocks her down before assuming her appearance. Weeks later, the Skrull, Pagon, meets with Veranke, in the guise of Jessica Drew, and kiss. The latter informs him/her that in order to conquer Earth, he/she must die. But to do that, he/she must make sure he/she is killed.

A week later, in Japan, Pagon killed the HYDRA spokesman who is in charge of the Hand. He/She expresses contempt for letting themselves to work for terrorists. In response, one ninja with black armor challenges him/her. The duel is quick nad he/she decapitates the ninaj. Instantly, the Hand starts bowing before him/her.

Retrieved from "https://heykidscomics.fandom.com/wiki/Mighty_Avengers_Vol_1_16?oldid=1446427"
Community content is available under CC-BY-SA unless otherwise noted.