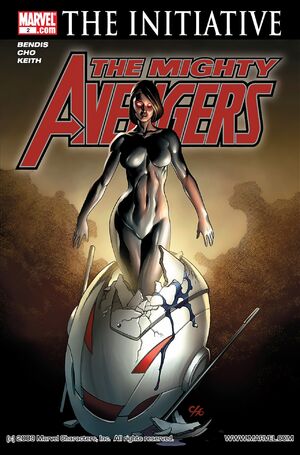 Following the appearance of the figure of a strange woman during the Mole Man's creature invasion, Ares attempts to attack her. Ms. Marvel stops him because she is worried that the woman might be Iron Man transformed or possessed. Mole Man asks the woman if she is responsible for the what happened to his underground home. The woman frankly confesses, calling it "collateral damage." Mole Man orders his minions to attack, but she easily repels and disintegrates them.

Ms. Marvel tries talking to the woman, but Ares insists on attacking it. The woman taunts Ares, enraging him to attack her with his axe. She repels the attack and sends Ares flying. As the Avengers retreat, Janet van Dyne says she will go talk to it because it is assuming her form. She asks the woman why she has a similar appearance, and she responds that it is because she loves her. Janet tells her team that Ultron is back to destroy the world.

Retrieved from "https://heykidscomics.fandom.com/wiki/Mighty_Avengers_Vol_1_2?oldid=1562157"
Community content is available under CC-BY-SA unless otherwise noted.