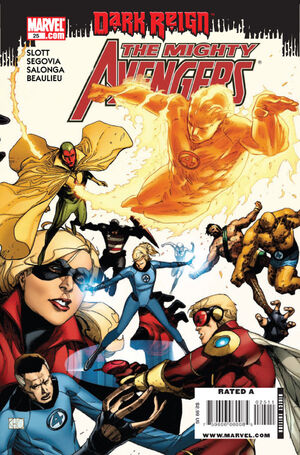 What would be the greatest heist of all time? Breaking into the First National Bank? The Tower of London? Fort Knox? No. It'd be knocking over the BAXTER BUILDING! But why would HANK PYM want to rip off MR. FANTASTIC? And are the other AVENGERS ready to become Earth's Mightiest Cat Burglars? Part one of the all-new MIGHTY AVENGERS/FANTASTIC FOUR throwdown starts here!

Retrieved from "https://heykidscomics.fandom.com/wiki/Mighty_Avengers_Vol_1_25?oldid=1723656"
Community content is available under CC-BY-SA unless otherwise noted.