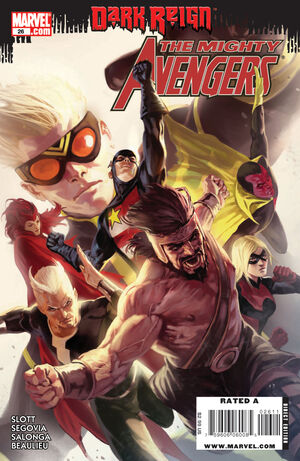 Twenty minutes ago, Mister Fantastic had locked the dimensional wave inducer in the Zeno Room and is about to take the children for a picnic, when the security system goes into high gear. The vents are full of Skrulls, so the Invisible Woman takes the children and leaves in the Pogo Plane. Mister Fantastic takes to the vents, to do battle with... ants, equipped with powerful jamming equipment.

Ten minutes ago, the Human Torch was appearing as a celebrity judge on America's Next Top Supermodel. The promo spot is cut short, however, when news that a Fantasti-Flare has been activated reaches them. Human Torch leaves, only to be ambushed by the "Red Ghost", while across town, the Thing is fighting the "Red Hulk".

In the Baxter Building, Mister Fantasic fights off the ants and makes a run for the Zeno Room. Wasp follows him, but cannot find Stature. Amadeus Cho finds her - on the Pogo Plane, where she proceeds to spell out their entire plan to the Invisible Woman out of a sense of loyalty - her father was in the Fantastic Four before his death.

Wasp has tracked Mister Fantastic to the Zeno Room. He is confident that he can fight any defense system Mister Fantastic has built, but finds only a normal-looking study. The dimensional wave inducer is there on the table. Wasp steps forward to claim it - and the room grows. The Zeno Room, named for Zeno's Paradoxes, ensures that trying to get from one side of the room to the other will take forever. Mister Fantastic is, it seems, the smartest man in the world...

The battles that have occupied the Thing and the Human Torch have converged, and the Thing point out that, while the Red Ghost is powerful, he can't fly. Vision and Hercules unmask, revealing that the duo were fighting "red herrings". Human Torch takes off for the Baxter Building, while the Thing stays behind to deal with the Avengers.

In the Pym Pocket, Amadeus Cho remarks that Reed Richards never shuts up, giving Pym a brainwave - he grabs the dimensional wave inducer with a sonic beam. A tug-of-war develops between the two scientists, which accidentally turns on the inducer. The two men vanish.

As the Invisible Woman returns to the Baxter Building, she is appalled by the ants. However, Valeria is able to create a feedback loop that shorts out Amadeus Cho's control of them and they disperse. As Cho recovers in the Pym Pocket, Jarvis and Jocasta argue about the budding relationship between Jocasta and Wasp. Jarvis argues that, since Wasp created Ultron, who in turn created Jocasta, the relationship is incestuous. Jocasta counters that, since Wasp is regarded as the father of modern artificial intelligence, the relationship is not only commendable, but to be envied by other robots. Jarvis is shocked.

The fight ended, the Avengers return to the Pym Pocket. With less that four minutes to spare, Wasp completes Salvation Two, and asks the group for one final component - Jocasta. She calmly walks into the machine, activating it. The Avengers argue over the cost of a life, but Jocasta responds that she is fine and that their new base is ready - they just have to step through one more door...

Retrieved from "https://heykidscomics.fandom.com/wiki/Mighty_Avengers_Vol_1_26?oldid=1446437"
Community content is available under CC-BY-SA unless otherwise noted.