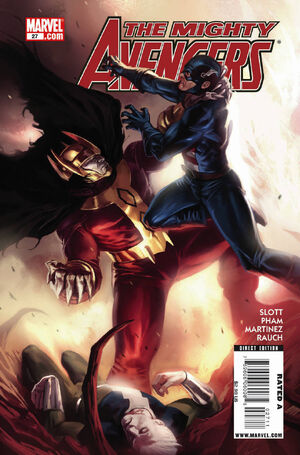 Appearing in "The Unspoken (Part 1)"Edit

Doom, Thor, Black Bolt, Black Panther, Ka-Zar, Namor...There are many monarchs in the Marvel Universe, but only one so powerful and so reviled that he had to be written out of history. He is THE UNSPOKEN. And his return will have dire consequences on both our world and worlds beyond. The start of a new storyline that will bring dishonor for one Mighty Avenger, redemption for another, a family reunion, and ties to both DARK REIGN and WAR OF KINGS.

Retrieved from "https://heykidscomics.fandom.com/wiki/Mighty_Avengers_Vol_1_27?oldid=1728168"
Community content is available under CC-BY-SA unless otherwise noted.