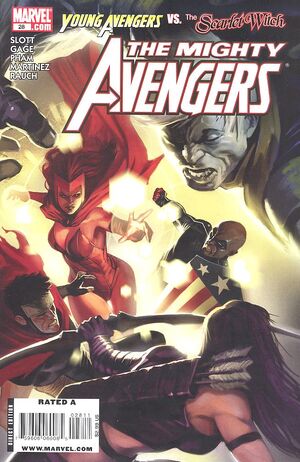 That's not how it works, Red. You owe us all explanations...and, Lady, Clint Barton is first in line!

Appearing in "The Unspoken (Part 2)"Edit

Synopsis for "The Unspoken (Part 2)"Edit

A few years ago, two young Chinese boys climb to Hermit's Cave, which they were forbidden to go to. Rumors state that a hermit lives there with an army of monsters. However, one of the boys, Rinzen, ignores his brother's warnings and the ones on the walls, believing there is hidden treasure inside that will make him more rich than Tony Stark. But as he explores deeper, he discovers the Unspoken, voicing to his Alpha Primitive workers on how wrong he was to take the Slave Engine and the Xerogen Crystals from Attilan but had spent his exile cultivating the latter to prepare for his return to Attilan and confront Black Bolt. Rinzen accidentally give himself away and the Unspoken kills him for trespassing and scares away his brother. But he hears a sound, which he recognizes from the day he was banished. He looks to the mountains and sees Attilan rising into the sky, right to the Moon. Realizing that Black Bolt had deemed their city unprotected, the Unspoken realizes that he is alone

In the present, the Unspoken decides to conquer China. As U.S. Agent and Ban Luck go an nurse the People's Defense Force, Quicksilver tries calling Pym. However, his call is cut off by the Scarlet Witch, intent on letting him die. This is witnessed by Stature, who attempts to warn Jocasta, only for the Scarlet Witch to cast a spell on her to prevent her from telling.

Loki then returns to Asgard, taking off her disguise, disgusted that she had to tolerate Stature to pacify the Vision and Quicksilver forcing themselves among the team so quickly. Their feelings towards her disguise would cause trouble for her plans, so she must find a more "permanent" solution towards Stature.

In the Infinite Avengers Mansion Dining Room #386, Vision and Pym discuss why they are still together. The points out that they've managed to defeat over a dozen threats, having earned the acceptance of most of the world, more so that Norman Osborn and his Avengers. Stature then tried to tell them about the Scarlet Witch, only for said person to pop in. She tries to convince Pym that Stature is a liability, given that she betrayed them to the Fantastic Four. However, Pym is all about giving second chances and asks Stature if she wants to stay. Unable to come up with the right words, she blurts out that she wants to go home. Therefore, Pym gives the team subatomic keys that will allow them access through the dimension doors.

Back in Tibet, the Defense Force attacks U.S. Agent and Quicksilver, believing they are the start of an invasion on Osborn's behalf. They have a fighting debate over the ideals in America, before Ban Luck reminds them that a powerful Inhuman is running around.

At the original Avengers Mansion, the Young Avengers are gathering to meet. Unknown to them, a H.A.M.M.E.R. surveillance team is waiting to capture them. But unknown to them, a shadowy figure knocks them out. Just then, Stature opens the door from the mansion, inviting her friends inside. But as the door closes, a throwing star prevents it from shutting, as someone comes inside.

Stature and Vision show their friends the Infinite Mansion. Patriot takes this as a "I hope we can still be friends" speech; Stature insists that it's nothing like that. She points out that their is one person they didn't show on TV: the Scarlet Witch, who may be Speed and Wiccan's mom. She subtly manipulates Wiccan to cast a spell to bring her here. Instantly, Loki is changed into the Scarlet Witch's image and brought to the Mansion. Realizing that Stature is responsible, she declares that "she has sealed your fate". However, behind her, Ronin comes up for a sneak attack.

Retrieved from "https://heykidscomics.fandom.com/wiki/Mighty_Avengers_Vol_1_28?oldid=1446439"
Community content is available under CC-BY-SA unless otherwise noted.