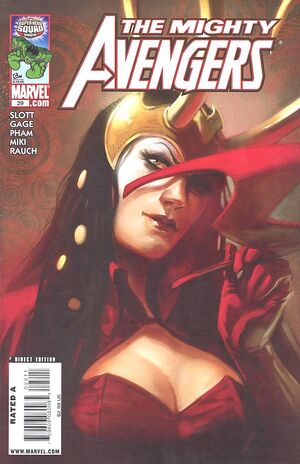 Appearing in "The Unspoken (Part 3)"Edit

"SECRETS & LIES" It's all out action at the Avengers new headqarters as RONIN and VISION face off against the SCARLET WITCH! Readers already know the Scarlet Witch is secretly LOKI, but could this be the issue where STATURE and the other MIGHTY AVENGERS find out? Also, on the outskirts of Tibet, QUICKSILVER and a longtime Avengers villain uncover THE UNSPOKEN'S plan to dominate all life on Earth. What is the secret origin of The Slave Engine? And what horribly, freakish thing has it done to the U.S. AGENT? Guest Starring: RONIN and THE YOUNG AVENGERS