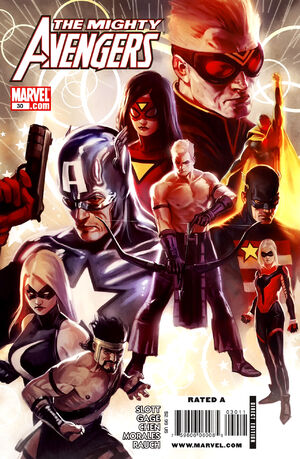 Appearing in "The Unspoken (Part 4)"Edit

AVENGERS ASSEMBLE! As the epic battle with The Unspoken threatens all of Earth, the team-up you've been waiting for finally happens as members of the Mighty Avengers, New Avengers, Young Avengers, and the Avengers Initiative unite to fight a foe that no single hero could withstand! How can we fit so many Avengers in one issue? Against the most powerful Inhuman of all, with the greatest weapon in history, do they have a choice? All that plus a special appearance by the Dark Avengers.

Retrieved from "https://heykidscomics.fandom.com/wiki/Mighty_Avengers_Vol_1_30?oldid=1657625"
Community content is available under CC-BY-SA unless otherwise noted.