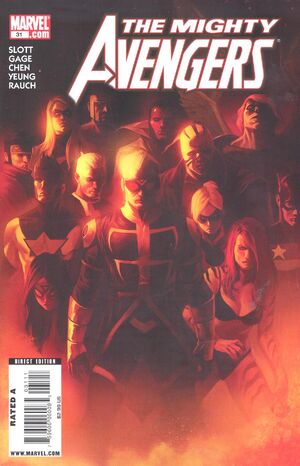 Appearing in "The Unspoken (Part 5)"Edit

The epic conclusion! The MIGHTY AVENGERS and members of the NEW AVENGERS, YOUNG AVENGERS and the AVENGERS RESISTANCE assemble against the incalculable might of THE UNSPOKEN! Plus QUICKSILVER is reunited with the INHUMANS... now what will they do with him? All this and the strange secret of the Infinite Avengers Mansion stands revealed! This one's got it all!

Retrieved from "https://heykidscomics.fandom.com/wiki/Mighty_Avengers_Vol_1_31?oldid=1732765"
Community content is available under CC-BY-SA unless otherwise noted.