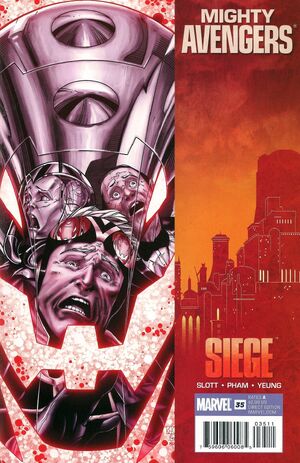 SIEGE BLOCKBUSTER TIE-IN!! SALVATION Pt. 1 of 2 "Heir Apparent" THE AVENGERS' GREATEST THREAT RETURNS! AND HE'S NOT ALONE... A rag-tag team of Mighty Avengers are thrust onto the front lines of SIEGE...with no one to lead them! And where's HANK PYM? Trapped in Pym-Space with his greatest enemy, his sinister cybernetic "son", ULTRON! A war on two fronts, a team divided, and when it's over...not everyone will be coming back! Big threats, big changes, and the biggest Avengers surprise of them all revealed!

Retrieved from "https://heykidscomics.fandom.com/wiki/Mighty_Avengers_Vol_1_35?oldid=1658088"
Community content is available under CC-BY-SA unless otherwise noted.