Part of the 'The Initiative' event 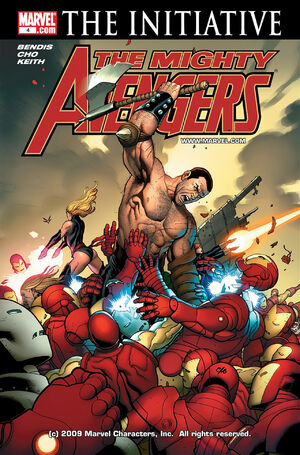 Hello, organic children of the planet Earth. I am the Ultron interface. [...] I was created to replace you. [...] Though you ultimately failed as a species, you should not be ashamed of what you've accomplished. You've done much with your limited capacity, but ultimately you were too greedy and too frail to ever last in the environment you've created. I've studied your literature and pop culture... You've fantasized about this day. And now it is here. Your Doomsday.

Using an international broadcast, Ultron announces her plan to replace humanity with herself. The Mighty Avengers finish watching the broadcast and listen to the robot, who identifies itself as Starktech 9. It says it is programmed to assist the Avengers or S.H.I.E.L.D. in case of Tony Stark's termination. Ares slices the robot in half, but stops when Henry Pym says he created it as part of Tony's fail-safe program.

As Henry works to repair the robot, Starktech 9 says Ultron has taken over Stark's "Sular Experiment" consisting of satellites capable of controlling weather patterns. Sentry and Wonder Man work on destroying the satellites. Ultron announces she will instead work on "Plan B", first causing an international blackout. The Avengers scramble to save a aircraft from crashing. Starktech 9 tells them that Ultron could "take over" Iron Man because he had recently integrated his armor into his biology.

Ultron infiltrates Stark Tower and enter Lindy Reynolds bedroom. Lindy wakes up and screams, but Ultron hushes her, saying this is Plan B. The Avengers go to Stark Tower and confront and army of Iron Man's past armors controlled by Ultron. During the ensuing battle, on suit of armor tells Sentry that Ultron is putting his wife out of her misery. Sentry finds the dead figure of his wife in bed. After working on destroying the Iron Man suits, Ares says he knows how to stop her.

Meanwhile at a missile base in Lithuania, two workers report to missile command that they have power again. However, they soon realize that someone is looking for the missile codes.

Retrieved from "https://heykidscomics.fandom.com/wiki/Mighty_Avengers_Vol_1_4?oldid=1446415"
Community content is available under CC-BY-SA unless otherwise noted.