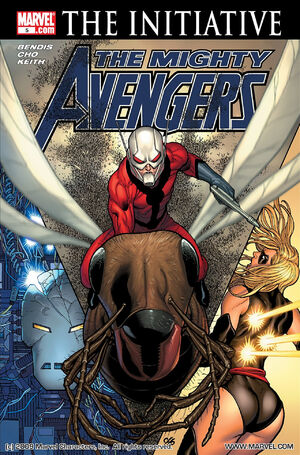 Commodore sixty-four. Go. Get. Need. I have an idea.

While the Mighty Avengers continue fighting Iron Man past armors, now controlled by Ultron, Ares hitches a ride on an armor and flies away. At Stark Tower, Sentry holds the corpse of his dead wife. As Sentry places his hand over her face, Ultron detects an energy fluctuation. Ultron taunts him, saying she had warned Sentry to leave the planet. Before Ultron can identify the type of energy Sentry is emittign, Sentry knocks her out of the Watchtower. Ultron counters the attack by knocking Sentry back into Stark Tower.

Ares tells Hank Pym to create a virus to defeat Ultron. After thinking about the problem, Hank tells Starktech 9 to get a Commodore 64, an old computer system. The robot then announces that Ultron is hacking into nuclear missile stations. Ultron continues battling Sentry, using the remote controlled Iron Man armor for assistance.

Ultron overrides the password for the nuclear missile launch. Maria Hill radios the news to Ms. Marvel, who flies onto the missile and changes its trajectory. However, the missile explodes before she can escape. As Ultron works on overriding the code to the next missile, Wonder Man attempts to disrupt her circuits with an ion field. She reverses the effect and meets meets Starktech 9, which she finds is outside her field of programming. The drone fires the miniature form of Ares on a S.H.I.E.L.D. scooter at her mouth. Ultron detects a virus and destroys the drone.

Retrieved from "https://heykidscomics.fandom.com/wiki/Mighty_Avengers_Vol_1_5?oldid=1446416"
Community content is available under CC-BY-SA unless otherwise noted.