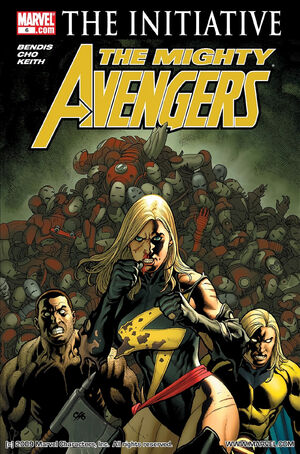 -- "Spider-Woman", holding the dead body of the Elektra impostor

Hank Pym gives Ares the virus as he puts on his Ant-Man costume. Starktech 9 launches Ares into Ultron's mouth. Black Widow calls off the Mighty Avengers, but Sentry keeps on attacking Ultron out of vengeance for his dead wife. As Ares approaches Ultron's central AI, Ms. Marvel apologetically attacks Sentry.

Ultron starts turning inside out when Ares attaches the virus. Wasp flies in to save Ares just before Ultron's form explodes. A lone figure falls out of the sky from the center of the explosion. Tony Stark then wakes up in the hospital, attended by Reed Richards. After the Avengers explain how Ultron took over his armor and body, he nods back to sleep for further rest.

At the Avengers Tower, Sentry tearfully reunites with his wife, Lindy and realizes that he had subconsciously used his energy to bring her back from the dead. Ms. Marvel meets Wonder Man on the roof and they kiss. Wonder Man says that she has to put everybody else first if she wants to lead the Avengers. Hank Pym and Janet van Dyne exchange a few words as ex-husband and -wife. As they go their separate ways, Ultron's symbol flickers on the screen. Later that night Spider-Woman, holding the dead body of a dead Skrull, wakes up Tony and says they need to talk.

C-3PO from Star Wars is an "Easter Egg" among the pile of Iron Man armors on the cover.

Retrieved from "https://heykidscomics.fandom.com/wiki/Mighty_Avengers_Vol_1_6?oldid=1446417"
Community content is available under CC-BY-SA unless otherwise noted.