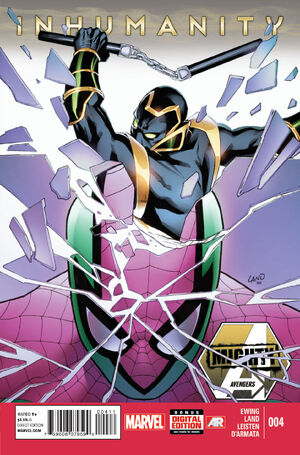 Luke Cage keeps the Mighty Avengers together following their fight with Proxima Midnight and made the remodeled Gem Theater as their base. The Mighty Avengers now have the purpose of helping those in need. During this time, the Spider-Hero becomes the new Ronin. Barbara McDevitt (the personal bodyguard of Cortex Inc. director Jason Quantrell) is discovered to be an Inhuman descendant whose powers were activated after she suffered from Terrigenesis and remained in a cocoon for weeks. Afterwards, Cortex Inc. enlisted Barbara in her new identity of Quickfire to infiltrate the ruins of Attilan.

• Plus: The birth of the new Ronin!

• This solicit sponsored by CORTEX Incorporated. CORTEX. Tomorrow is in our hands.

It is implied in this issue the identity of Ronin / Spider Hero is that of Eric Brooks (known as Blade), because of his interest in vampires, or as he calls them walkers, his cloak that he wears which is the same as his old one and the blades always present around him when he appears somewhere.