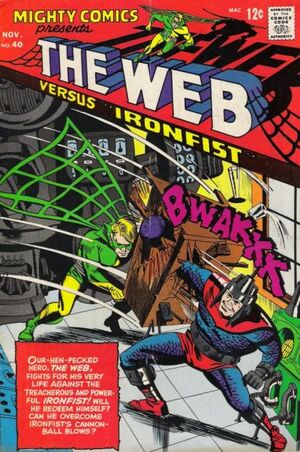 Women! Rosie married me because of my glamour as the Web! Then she insists I quite being the Web! What am I? The brave, bold Web... or a spineless spouse?

Appearing in "The Web Vs. Ironfist"Edit

Synopsis for "The Web Vs. Ironfist"Edit

After his battle with Ironfist, the Web is too groggy to chase after him. He limps home to his fussy wife, who continues to chastise him for being a superhero. She threatens the Web with divorce, and moves in with her mother. She also tips-off the newspapers and TV stations about her husband's dual identity.

Realizing that he will miss his wife, the Web promises to give up his costume career. But, as he is about to agree with his wife, Ironfist comes knocking again.

The Web battles Uglyman, a masked movie-star who wants to sabotage the career's of other stars.

Retrieved from "https://heykidscomics.fandom.com/wiki/Mighty_Comics_Vol_1_40?oldid=1578727"
Community content is available under CC-BY-SA unless otherwise noted.